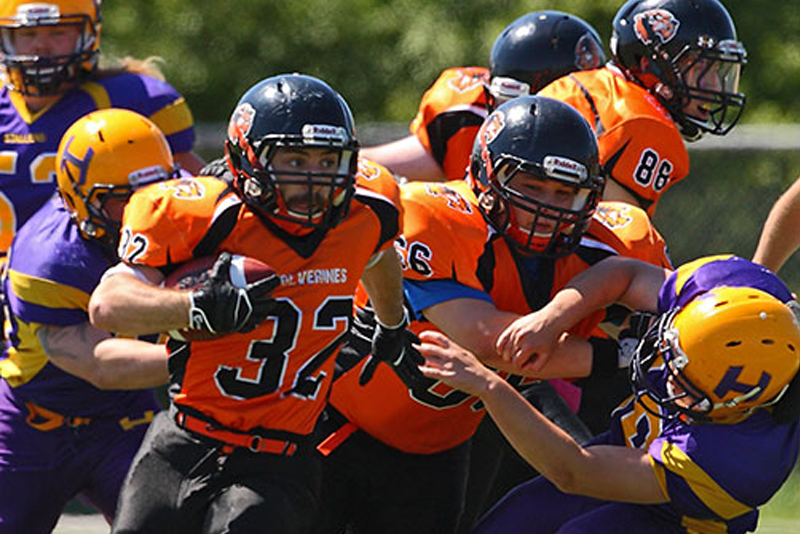 The Wolverines Bantams started slowly and fell behind early as the Hawkeyes built a 21-0 lead at the half. The Wolverines came to life in the second half due to the outstanding effort of Lucas Brooks who scored three touchdowns. Tristen Ross added one convert kick, however, the Hawkeyes continued their offensive scoring attack to finish with the 40-19 decision. The Wolverines record is now 2-3.

The Jr. Varsity game was a great effort by the Wolverines as they dominated the Hawkeyes for the 24-2 victory. The Wolverines were able to quickly build a 10-0 lead in the first quarter and increased that margin to 24-2 at the half. Both teams played on even terms leading to a scoreless second half. Scoring for the Wolverines with single touchdowns were Brett Bjorgan, Jamie Cooper and Desmond Davies. Hayden Mcilmore added three convert kicks and a 22 yard field goal. It was truly a great victory for the Wolverines who have improved their record to 2-2.

The final game of the day was an exciting and hard fought victory for the Wolverines Sr. Varsity as they gained their first win of the season. The game started with Oshawa scoring on their first offensive play, a 95 yard pass and run with a successful convert kick to take a quick 7-0 lead.
The Wolverines were able to tighten up their defense from that point on and in the third quarter were able to block a Hawkeyes punt resulting in Silas Hubert recovering the football in the end zone for a Wolverines touchdown. With a successful convert kick by Spencer Vesnaver, the score remained tied 7-7 until the last play of the game. With less than three minutes to play in the game , The Wolverines took possession of the football and with a great effort from running back Kyle Milburn and the offensive line they drove the football down the field and with time expiring, Owen Hubert was able to score a single point off a punt through the Hawkeyes end zone to secure the Wolverines hard fought victory. The Wolverines record is now 1-3.

The Wolverines will be on the road this Saturday for the final time for the regular season as they will travel to Scarborough to face the Thunder with the Bantams game at 1 pm, the Jr. Varsity contest at 4 pm and the Sr. Varsity nightcap at 7 pm. All three games will be played at the Birchmount Stadium in Scarborough.