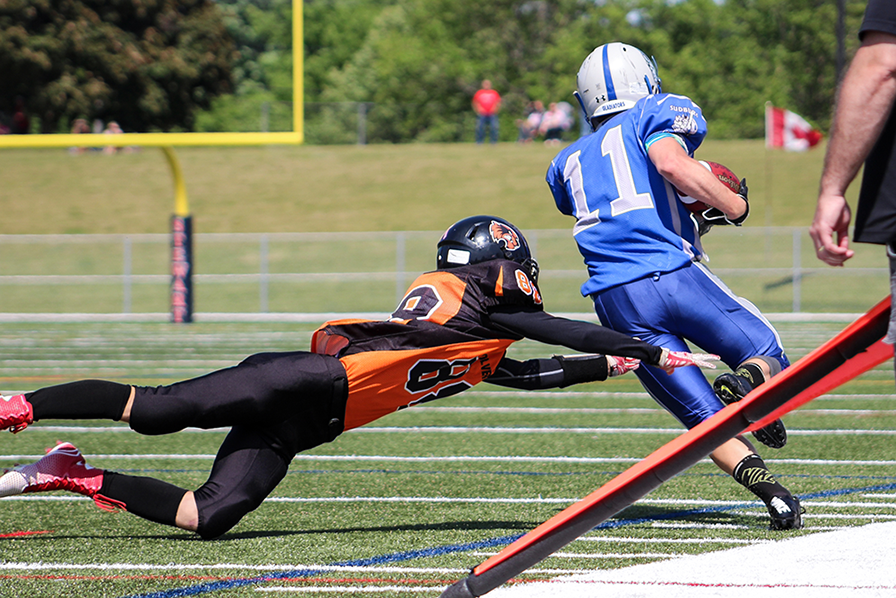 The Bantams started the day with a great all around effort and with their 40-12 win over the Eagles have assured themselves of a playoff berth. They have one more regular season game this Saturday when they will host the Oshawa Hawkeyes. The final results of all Bantam games this weekend will determine the final four seeds and their alignment for the playoffs which will begin on the weekend of July 20th.

The Bantams started strong and easily lead 21-0 at the half and continued their balanced attack in the second half to earn the 40-12 victory. Scoring for the Wolverines were Lucas Brooks with 3 TD’s, Nate Thomson with 2 TD’s and Ryan Forsyth with a single TD. Tristen Ross was successful on 4 convert kicks.

The Jr. Varsity game was a crucial contest between two teams that are battling for a playoff berth and the Wolverines with their 29-12 win have basically secured a playoff berth. They will have a final season game this Saturday when they will host the Oshawa Hawkeyes in the triple header at the TAS Field. The results of this weekend of all the Jr. Varsity games will determine the final four seeds and alignments for the playoffs. The Wolverines are playing well and look forward to a rematch with the Hawkeyes.

It was a hard fought game with the Skyhawks and the Wolverines worked hard to take a 14-12 lead at the half. They came out strong in the final half and scored 15 unanswered points to seal the 29-12 victory over the Skyhawks. It was a great win for the Jr. Wolverines and they look forward to hosting the Oshawa Hawkeyes this Saturday. Scoring for the Wolverines with single TD’s were Brett Bjorgan, Hayden Mcilmoyle, Jamie Cooper and Daniel Corrigal. Hayden Mcilmoyle added 4 convert kicks and Mack Weil scored a single off a punt into the end zone.

The final game of the day was a good solid victory for the Wolverines Sr. Varsity squad with their well deserved 37-5 win over the Sr. Skyhawks. The Wolverines started strong and built a 16-5 lead at the half and never looked back outscoring the Skyhawks 21 -0 in the final half to record the win. Scoring for the Wolverines were Owen Jordan with 2 TD’s and single TD’s by Spencer Vesnaver, Sam Rumleski and Kyle Milburn. Trent Rowe was successful on 3 convert kicks and Zach Vesnaver on 2 convert kicks. The Wolverines recorded a team Safety as well.

The Wolverines will close out their regular season this Saturday when they will host the Oshawa Hawkeyes in a triple header at the TAS Field. The Bantam game is at 11 am, the Jr. Varsity game at 2 pm and the final Sr. Varsity game is at 5 PM.