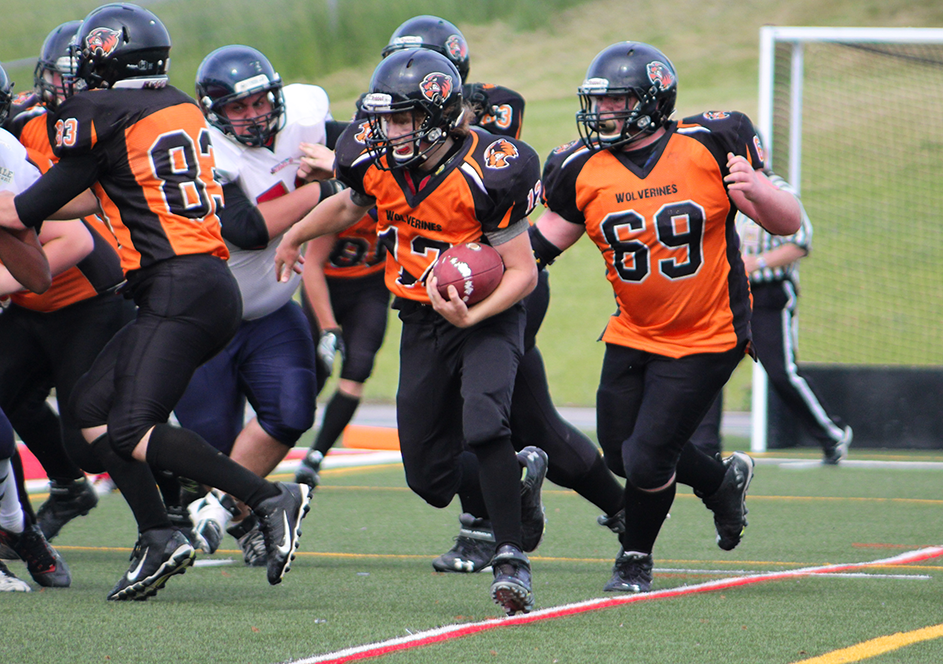 The Peterborough Wolverines Jr. Varsity team travelled to Scarborough on Saturday to face the undefeated Thunder for the Ramsay Conference Championship and the Thunder were able to defeat the Wolverines 20-8. It was a battle between two good football teams and the Wolverines played fairly well on defense limiting the high powered Thunder offense to three TD’s, however, the Thunder defense was outstanding in basically shutting down the Wolverines offense.

The game started with the Wolverines kicking off to the Thunder who were able to take the football down the field on a long march that lasted over 8 minutes to score the first TD of the contest. In the second quarter the Wolverines defense was able to tackle the Thunder punter in his own end zone giving the Wolverines a team Safety which left the score 7-2 for the Thunder. The score stayed that way until the end of the quarter when the Thunder scored a TD as time expired giving them a
13-2 lead at the half.

The Thunder increased their lead to 20-2 with a TD in the third quarter and they continued to contain the Wolverines offensive efforts. Then with 32 seconds left in the game, the Wolverines were able to execute a great offensive play when Quarterback Brett Bjorgan completed a pass to Jamie Cooper who broke through the Thunder defensive secondary to score on an 85 yard pass and run play for the Wolverines lone TD. The Thunder with their victory and a perfect 10-0 record will now advance to the OFC Champ Day this Saturday in Oshawa to face the Dittmer West Champions.

The Wolverines ended their season with 6-4 record and Coach Rick Thompson was certainly pleased with his team’s effort today against a very strong and powerful squad. He paid tribute to his staff and the players for having a good season and continuing to improve and develop as the season moved forward. He was especially pleased with the great upset victory last week against the Etobicoke Eagles. He is looking forward to 2020 and another Wolverines season.

The Matchups for this week’s OFC Champ Day at the Oshawa Civic Stadium on Saturday will be: